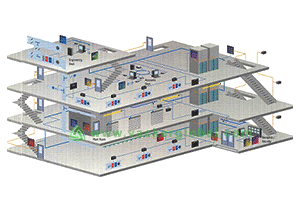 With enhancements in technology taking place at lightning speed, we, humans crave for a more technologically advanced and comfort living. Building automation is one such endeavor in this direction, essentially referring to a Building Management System (BMS) or Building Automation System (BAS) that includes systems such as lift, alarm, fire detection, parking sensors, air conditioning, etc. These systems are connected to the internet and can be monitored from remote places. Also, multiple buildings can be monitored by a central base station through the internet. 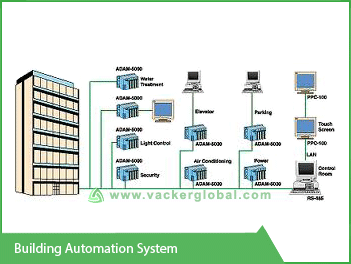 There are lots of parameters to be controlled when performing building automation. Some of them are mentioned below in a decreasing sequence of impact:

Other parameters can be monitored by using various sensors.

Within a BMS, a communication language or protocol is used for transmission of signals between the system components and a central processor. A BMS will usually have a large number of components interconnected to each other, communicating through the protocol. Manufacturers of components have their own protocols, with some prominent ones being BACnet, Modbus, KNX, Lonworks, etc. Further amendments, if any, to the system, require usage of components adhering to the same protocol. However, one can use an interface component to integrate with components using different protocols. KNX is an example of one such open interface protocol component.

These are home automation systems of a smaller scale. Vacker Maldives operates in regions of Maldives such as Hithadhoo, Malé, Fuvahmulah, Kulhudhuffushi, Thinadhoo, Naifaru, Hulhumale, etc. Few examples of small building automations are listed below: